This past weekend brought many vivid dreams the kind you totally remember in it’s entirely or in parts; but you pondered them no less.

“A dream can sound so crazy when explaining the events awake, but feel so real, natural and relatable while asleep; what do you dismiss? A true dreamer keeps the stardust while a sleeper snores for his bedside alarm. -ES”

Backyard Buddies Dream: November 10th I dreamt of seeing a white mountain goat wild in my backyard (which looked like my sister’s yard). I went outside to see if he was friendly and he was soo sweet that another came or some kind of animal I couldn’t make out (fuzzy in the dream) but was none too happy to oblige to petting also white. I had left my back door open and this bear cub with extra long claws goes into my home and I’m scared his mother might follow or worse he’ll eat my cat. I run in but I’m intimated by this wild one. I try using a makeshift shield to guide him out like a bee in a house but he is so fast and not interested in what I want. I finally decide to just pick him up from behind and he doesn’t fight me but I’m a little shaken that I toss him out the door. In the morning I see that they are all outside in the snow cuddling and I find it funny and concerning.

Now, some dreams I have are totally premonitions and some are collective signals to show I’m plugged in. This was a “signal dream” due to the fact that later that day I learned my kids were going to visit my sister while I visit my other sisters for Thanksgiving I won’t be surprised if it snows.  That same night my son picks to watch the cartoon we bare bears he swears I’ll love and we binge watch cuddling watching 3 bears. The day before (Friday) a friend found a single lovebird at school, I was remembering when I found 2 white doves lost there too and found a carcass of one of the pair 2 days later which correlated with a heartbreak of my own in which I felt I lost my lovebird (twinflame soulmate)…but now a new lovebird has entered. I just learned today that he’s going to be ours (so long as my cat with claws (bear) doesn’t harm it I’ll be sure not to name him “Catnip.”

I am invited to a very fancy retreat I feel is for business. I am to check in and give my credit card for deposit. The thing is I have a feeling it’s covered but what if it’s not? What if I have to spend in order to receive this opportunity I’m wondering as I see the $795.00 a night bill. I’m embarrassed to decline the front desk until I know if it’s covered but how do I go about this discreetly (my personal goal, in reality, is to pay off my card so I Don’t/won’t add to it) Unexpected company comes inviting themselves to use my suite believing it’s handled and provided by the person who invited me and I haven’t even decided if I want to accept yet. I go to the meeting and this person tells my mix of coworkers and acquaintances to leave they were not invited and I’m embarrassed they crashed on me too. I admit I had canceled the reservation upon seeing the bill. The dream ends and goes into another proposition.

I’m sitting across a male donned in construction gear from hard hat to gloves on both hands. He’s wearing glasses so I can’t read his expression in his eyes as he tells me how he adores me and how well I will be treated. He pours his water into his glass and stirs his gloved finger in the glass to break the ice cubes. I hear him drone on the wonderful ways he treats women and those he loves but I see he hadn’t even taken a shower or showed any excitement or nervousness to expose himself to me (he’s nonchalant) he expects I will be thrilled but I am not. He’s offering what he wants but he’s not asking or searching for what I want or what we want together as there are no inquisitive questions only a script offered. I see myself leave and go into the final offer.

A famous respected woman is in deep thought as she greets me, she wants me as a key person in a plan she hopes to create except her vision is not yet finished. She knows I’m to be included but she hasn’t really made a master/business plan yet and in trying to articulate to me she’s aware of it. I decline until I know what is expected of me and she nods in agreement and disappointment hoping my collaboration would help her but she doesn’t know what she wants yet and so I can’t commit until I understand her blueprint. We leave it unfinished as our conversation is disturbed by people next to me hiding something shady making a deal I feel is really illegal and harmful in the car parked next to my bike she walks back to her place and waves clearly consumed in thought she looks disappointed but I’m not “it’s just not ready yet.” I’m just happy to see things moving in my life reflecting on all these mini-series propositions. Just then the night sky is penetrated with sunlight in a patch in the sky it reminds me of an aura-Borealis the way it bends light and I see angel faces like children dressed in white gowns and red ribbons totally like mass singers on Christmas even reminds me of the nativity set of the angel above the barn we owned as a child.  I am in awe and taking pictures while people are dumbstruck.

This to me is a prediction dream. I know every detail but it also includes ‘signals’ received as I wrote this (I just got a call about this Harvard spots possible Alien probe) well that’s sorta like a crazy vision in the sky Ha!  I know I will have many choices or decisions to make and it seems by the end of this year or by Christmas. I seem to have to wait for perfect timing and I need to discern with logic, heart, and faith.

Now we’ll just wait to see what unveils or if this was really just a dream.

UPDATE 12/4: Well the 1st Proposition was just a “signal snapshot,” meaning someone who had, in reality, had offered to snatch me up for their own workplace whenever I’m ready to leave my present job was enjoying his family at a really high-end resort I had come to know after this dream. The photo snapped into place when I came upon it and I knew it was a signal for “yes, this is not a dream but dream academy PAY ATTENTION you’re in the zone.  I’m not kidding you when I end up at a place with a nativity scene that totally reminds me of the last scene in the last dream the gold glitter really resembles the feeling of the Aurora borealis and the feeling of “a miracle” I felt when I saw this on 11/18 another “yes” from the universe. 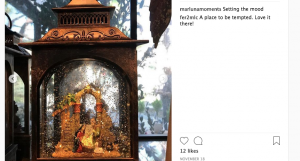 The 2nd Proposition happened many hours later when someone told me about an amazing man she met who shared all her desires and dreams so perfectly matched (oh um about that I thought) “Really, that’s great!” I remarked “but how strange that I dream of a date too,” and shared my dream with her. She frowned “you think it’s too good to be true?’ I nodded no “I’m not saying this dream was for you (but I wondered) just that …how odd that you go on a date with a construction worker and …” she interrupts me “and he says everything that sounds amazing to me.” I left it with “be careful.” The end result was that he was wearing a mask and totally became a shady character (hello! the people in the car next to me in the final dream were I felt they were hiding a body and doing shady deals that made me so nervous) this guy was unstable.

Prop #3 To be determined, although today I heard 2 people on different shows talk about the powerful time we are currently in and not so much planetary, but GOD showing up in miracles. Hanukkah mentioned as a time of miracles and a dream was told about people completely having near misses of disasters to get them to do a 180 or pull a Scrooge and wake up a better soul.  I don’t doubt it I mean as I type this I get a confirmation to get me to see the synchronicities piling up to get my point across (even if it’s just to me lol):

GOD BLESS YOU (no really its gonna happen to us in one way or to another close to us but accept the gift and fall on your knees AMEN.

I FORGOT! The day I was given the lovebird a teacher remarks “funny there’s a white dove that looks tame by grade 6 I wanted to tell you, but you have a bird.” WHAT! I ran but I didn’t find him. Later 2 students tell me about the lone white dove that wasn’t afraid of people…Could it be the missing dove torn away from its beloved partner coming back and JUST MAGICALLY after I wrote it here? Was my hunch right and my lovebird is a sign of a replacement to the one who never fulfilled my dreams???