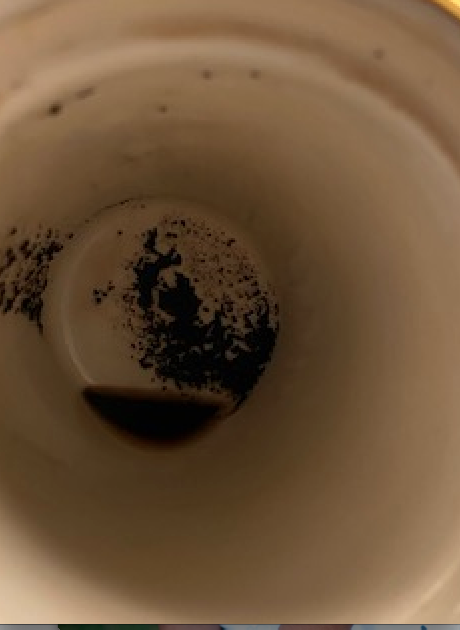 February 11th: I had a dream come to mind at work here’s the dream recall:

I’m late for work and in a foul mood I run to the fridge and verbally blow up about the milk in the fridge (maybe I spilled it) and give attitude to my stepfather who was innocently standing nearby. I head out of the house (knowing what a shit I was being) out in the desert of nowhere and notice a deep blue inky fog enveloping around our house, scared I ran in to warn the family. I come out when the sun reappears and I can see in the distance a tip of a stark white turban peeking from the bottom of the incline toward the path of our house. I can only make out it’s a man all in white and I’m convinced he’s coming for me. NO NO Nope!

I wake up and immediately intuit “The Alchemist!” Why I didn’t want him at that time is probably due to my new single life adjustment and I didn’t want complications. Funny how I immediately link it to romance not hello Spiritually incoming! Always a romantic, I was already having a sci-fi fantasy play out in reality. I was dreaming of a man who I seemed to have a mirroring life in reality. I was attracted to him immediately hearing his voice and I had so many coincidences that I would dream his actions before it was written in his blog, or felt his body pain/moods matching the connection in his media, but he would never know me. I was obsessed with the connection and read everything there was on “twin flames” which were slim in 2011. Nowadays it’s out of control in uneducated content! People are clueless in my opinion because it’s a very long journey most give up on it or force it to happen only to find ruin; it’s not black and white. I was going to write a book on it but I would have to show our timelines (had them all at one time) to convince people because it’s so nuts, but that would expose me and his life and at what cost? This taught me unconditional love and a lot more when you start off with a tin man’s heart and end up with a heart of gold (alchemy). You might find yourself alone riding into the sunset for a good long time (many lifetimes) with a Fatima* knowing the wait is worth it biding her time in her own worth awaiting divine timing.

Years passed before I finally cut the connection cold turkey and several months later I would find myself attracted to objects, music, movies that would match a new man coming into my life for a limited time. In fact, that inky fog mixed with clouds returned in a dream premonition finding us both…well that’s in book with chapters left to finish writing. But let’s get back to February 11th and me pondering “the Alchemist” just sipping my coffee …until I get a mouthful of coffee grounds YUCK! I lift the lid to see an image of The Alchemist of my dream.

Now try seeing the image in the cup below as a mystic. You’ve just had an old memory pop into your mind and now it appears in symbolic form in reality.

Next, I’m off to lunch and bored only minutes left I look at my horoscope on YouTube and find this which describes her vision of seeing a desert (not joking) and she then goes into the meat of “The Alchemist” book using the same verse my mother would send to me yesterday in an Instagram (she had no clue what was transpiring) Redacted I do remember sharing on my Instagram “the alchemist is showing up” but we can look at the timeline of the message nevertheless of coming across her feed on the same day I was writing a blog about it (sweet universe sweet).

The other video reminded me of the character ‘The Englishman*’ and I don’t want to downplay her message or hurt her image or journey, we all get to to the enlightened finish line, but it left me wanting to share my own content as I do here but on a vulnerable level for me (I like behind the scenes). I don’t have a need to hit any large audiences I enjoy a hermit life but many people now sharing “spirituality” are so excited they don’t wait for the grading of the lesson to return before sharing if they aced it or got a passing grade. Plus it’s a fast way for the spotlight for those wanting the camera time and some using spirituality as means for funds strictly but it will all come in some way or form in all creations, the greater goal is being in service of humanity in which the magic now seeks you softly or visibly but its a responsibility no less to be taken in humility and respect. We need true authentic assistance for our inner goodness to peak like Crow Tarot just assisted me and the other reader assisted others in her messaging relating to her audience.

Now I know I need nature to piece this all together or at least take a journey and I decide on a road trip to Ojai which begins to place the pieces together of what might be the reason for the pursuit of the alchemist. Read part 2 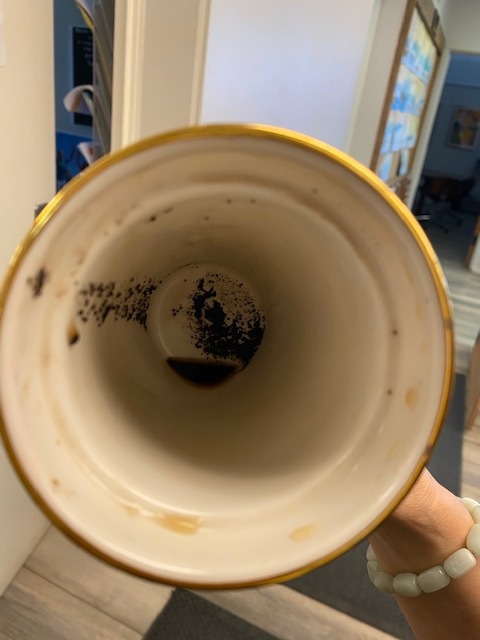 The Alchemist in my cup

Rorschach test! Can you see the alchemist sitting on a cliff with a branch or even spirit behind his turban? Even the placement of his precarious perch on the very edge of cliff denotes ‘trusting the universe.’