In writing, I openly release unscripted.

In reading, I comprehend unedited.

In observation, I sense, intuit and feel what has or needs to be released, healed or awakened.

“Talk about DIVINE TIMING!” Also this morning I walk into my office a group of men waiting to talk to me about a unit to be placed on our grounds as their waiting for our maintenance manager one of the guys starts talking about how his daughter was afraid to tell him about a boy she was dating (they all laughed). I chimed in “that was my biggest thing with my Dad he always intimidated guys I was so afraid to fall in love or look at someone I’m attracted to.” (read pink bedding dream) so yeah I was too carrying a full heart knowing his spirit and the universe keeps us close…not to mention a very handsome fireman came in and 30 later and I was laughing inside knowing my Dad set it up. I can’t prove it but I knew the moment I couldn’t open the document the fire dept. sent me that someone from the department would volunteer to come to deliver it lol.

– My response to a comment in “For Keepsake” blog

For me, journaling is channeling your own soul psychologist.

I re-read what I wrote (bolded above in my reply to the comment) and quickly my heart nearly exploded in my body to reveal to me what I’ve been carrying for so many years.  I openly gasped and then I saw what time I responded noting it was around 5:55 which is symbolic for: major shakeups for our best growth. MIND YOU it was discovered on a new moon cancer partial solar eclipse which is symbolic for Sun (male prominent figure) Cancer (family, nurturing).  Okay enough with the backstory let me explain what immediately flashed in my mind upon learning  I WAS AVOIDING LOVE.

I knew instinctively. I describe it as “a time capsule captured recent events to merge into a pill that I swallowed to remedy what I didn’t know was hurting me.” See, earlier this month my eldest sister asked if I would like to attend a wedding of our cousin’s daughter this month and before I would answer YES, my stomach hit the floor in uneasiness and I added I hope there’s not a fight included with this one. I wasn’t talking about a family feud they are loving and dedicated to family. NO, I was talking about the past!

When I was around 19 – 20 I was leaving my cousin’s lovely wedding with my Dad around 1 am and this lone car near us starting howling out to me and making suggestive comments to which my father (true to form) would glare and respond with words of disgust aiming to protect me. I told my Dad ‘shhh forget it, let it go’ well aware of the dangerous scenario that could happen and did. They were looking for something to do and these two men park and leave the car to walk toward us. I know he can’t take on both and I can’t help only make the situation dire for my Dad.  I don’t want to leave him, but I can run in strength in my youth and head to the hall. I scream for help or say “My DAD!” I don’t remember and run out and NOT one Man in the Hall stays behind as they follow me to the where my father is badly getting beaten. It was horrific but he escaped with bruises and stitches.

Now read those words again: “that was my biggest thing with my Dad he always intimidated guys I was so afraid to fall in love or look at someone I’m attracted to.” … because it would mean LOVE or attraction equals Pain. So, therefore, I married a long time friend who I did love of course, but I avoided falling in love. All those yummy scary exciting feelings unknowing pull for a stranger who could become a significant part of my life. It was always someone I already knew and trusted except for ONE. That “One” experienced major betrayal in his marriage I learned upon meeting him, so I’d say we found each other divinely but his scars were deeper than mine or he was just for me to taste what I’ve been denying and spirit trying to develop my appetite for what can be found someday and heal.

Also, I’m adding a clip from “George the reader” 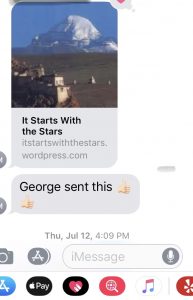 who I mentioned in “For Keepsake” blog telling me what he thinks the departed does for us on the other side. George also “Randomly” was mentioned by a friend on July 12th. When listening to the clip it just resounded so much for me and even more so now especially when he accuses me of being “afraid to love,’ as I challenge him on his opinion lol boy was I  WRONG.  Thank you team heaven for leaving pieces for me to find.

I wrote this last night but couldn’t add the voice clips of George that I felt was relevant until I had time to copy it.  This morning as I’m driving to work to let firemen use our facility I remember that dream #knightoffire and how that magic man fixed the broken lamp but what if it meant “Dear child when the fireman come to use your facilities you will fix what has been broken and your light will shine once again.” That’s how spirit weaves massively on a bigger scale (but I still hope it’s a sign of who is coming). I decide to turn up the music and the lyrics play “SOMEDAY LOVE WILL FIND YOU, BREAK THOSE CHAINS THAT BIND YOU, ONE NIGHT WILL REMIND YOU.”