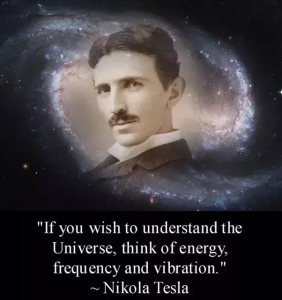 It’s almost funny that I attended anything that would be heavy in math configurations! I went on a girl trip to the Integration in the desert. It started with a trek to the great rock a revered boulder by the Hopi Native Americans here long ago who claimed it spoke to the chief about Mother earth and her well-being. It was heartbreaking to see broken bottles and graffiti among this holy site of the Hopi it disgusted me until our leader asked us to grab hands and bless in four directions bringing back sacred prayers amongst the motorcyclist and 4×4’s and selfies who enjoyed the graffiti and the trash they left blowing in the wind.

In his latest book, “The Secret of the Beloved Disciple,” James Twyman wrote extensively about two important shamans in this area, Shri Naath Devi and Fr. John, a priest from Los Angeles. An important happening took place at the Integratron with Shri Naath Devi and Fr. John a mile away from Giant Rock, during the two days prior to the boulder splitting. Twyman believed that this story needed to be shared with as many people as possible so as to focus prayers and energy on the important era we have recently entered. On February 19 and 20, 2000, Shri Naath Devi was inspired to bring a number of powerful healers to the desert near Giant Rock to pray, and meditate. She said that the Native people were no longer doing a ceremony in this area and that the earth itself was about to react with a violent upheaval. If the Mother accepted the prayers that were scheduled, then Giant Rock would crack at the side, relieving pressure on the Earth’s tectonic plates. If the prayers were not accepted, then Giant Rock would split directly down the middle. The fact that Giant Rock had not moved for millions of years made the likelihood of such a change remote. And yet, the next morning, to everyone’s amazement, the boulder had not cracked, rather one-third of the rock had split and had fallen to the desert floor. Shri Naath Devi interpreted this in the most positive light. She said that the Mother had opened her arms to us, cracking open her heart for the whole world to see. Fr. John was there for part of the prayer. He too felt the incredible shift and joined two of Twyman’s assistants who had participated in the prayers with Shri Naath Devi. They had gathered at her house less than 24 hours later. As they stood in the kitchen discussing the events, lightning struck, sending a ball of light through the center of the house in a north/south direction. Within moments lightning struck again and shot through the house in an east/west direction. This was a very auspicious moment and was witnessed by all four people. Shri Naath Devi declared that the prayers were now complete and that the lightning was honoring the four directions as a sign from the Mother that supported this completion. The boulder had split open only two hours prior to this gathering. text 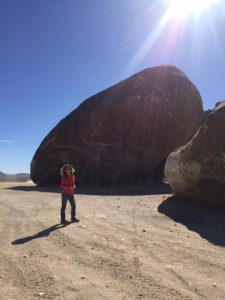 It’s a good thing I hike I was able to scale down faster and get a bit of time alone to feel the vibes, my friend in sync with me catches me! 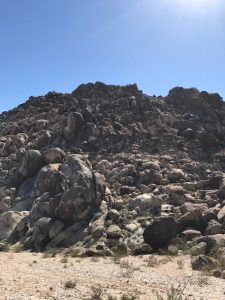 I felt the boulder and immediately in my high heart a strong vibration (the high heart is said to be one of the more chakra’s that will be revealed in time and used by all but it’s currently only engaged by the initiated or those practicing compassion) it’s just under the collarbone where “unconditional love” is found. A girlfriend sees me engaging with the rock and tries it out near me and I ask her if she can feel it but she answers “no.” Let me open you up and I place my hands on her back and ask for her heart to open to feel it and I could feel the energy pulse through my palms like when I send healing she exclaimed “I feel it!” and she pointed to the higher heart and said what does this mean- I was ecstatic! A stranger asked me what I was doing and I say “opening her up to feel it” I regret not asking her if she felt anything or the group to assist others (missed opportunity) but my scribe in me had to note things intently; I was here to be educated. I moved to the boulder on the ground (the piece that broke off) and when I touch it I immediately felt the first Chakra vibrate known as “Earth” or as our “survival spot.” WOW we depend on our Great Mother and her injured told me our SURVIVAL depends on our Higher HEART Energy, just like the Hopi said.

We move to the Integratron and go to the basement where the true grit lies. This is news to me because I experienced the top floor in crystal bowl meditation before and assumed it was the main tool but I did note it looked like a harp underneath like a musical instrument and that’s just one of its purposes. The leader Eric (a really nice man and explains in layman’s terms thankfully I recommend this experience to open your mind) explains the scientific math that goes into sonic geometry click here to learn more

We then get to experience the “formula of perfect harmony” 432 Hertz. We are encouraged to walk around and feel the column (copper inside) that goes directly over the Ley lines and into 3 rivers that meet below. We have the largest group he’s ever had (and the nicest group he adds- its true we got really young and pretty people to older and young at heart all chilling) so there’s not much room to hold the column long.  In short, my friends felt more vibration in the column and I felt it around it the column and dare I say it “like frets!”  I felt like a guitar my chakras akin to the headstock getting tuned and energized by each fret I step in front of, basically just maybe 3 steps of where I stood before (OMG it matches Tesla’s love for 3,6,9). Anyway, this place is said to be many things when it was created but I conclude without a doubt that I had each chakra tuned, albeit the crown chakra, and perhaps the basement is the spacesuit needed before you head upstairs to rocket out and leave this body and go onward.

We head upstairs to get the crystal bowl effect with 432 hertz it was fantastic and I saw the colors I hadn’t seen since my life changed dramatically after/on August 7, 2013 (haa almost 8/8) the gold and violet colors each in a circle but like an infinity sign click here for more info they linked not perfectly it was blurry I had my eyes closed -wow another math equation I just learned thanks wiki! I didn’t have an out-of-body or anything (last time I had no memory of time I was gone until someone snored).  I would love to go back and see if others felt what I did or is it that whatever gifts you use (mine healing) is opened by the pineal gland that is said to happen; therefore you get charged in that area. Could I heal or “open someone” to feeling the chakras and then heal deeper issues? I’m not sure but I want to investigate more and see if it changes or stays consistent with each visit.

NOTE! Although I don’t rush when I write these blogs it takes time to regress and articulate and I’m a busy woman so I just post it without consideration to editing (sorry but if I did carefully edit; perfection would keep it locked away not shared) I realized I had a prediction dream in 2010 about an earthquake and woke up at the same am time as the date 3:29 am on 3/29/2010 this is from memory I would have to look at old notebook journal to find it but it strikes me as relevant to this visit to the great rock.

EARTHQUAKE DREAM 2010 EASTER: I’m driving in my old neighborhood I grew up in and the car starts to thrash about. I can see in the distance the “Hollywood sign” crumbling and before I can associate what is happening I see white lightning like font formulate and write in the sky “8.0” I panicked but I see (wait for it) A huge boulder that is open and it has staffed people like a major sports event flagging people to park in certain spots. They point their orange flags and you don’t look for parking you just keep circling (like the airport in Washington state parking structure) I mean since when are dreams making sense to get me to drive cyclical! I was appointed a spot and I get out of my car it’s very dark and apparent that I’m in this boulder there is no chaos or shaking and I can see other people who are also bewildered arriving and people (designated staff) dressed like a race car driver in orange jumpsuits or I just remember figures in that color amongst us.

When I wake up I’m covered in sweat and note the time …what date is it? This is when I know numbers don’t lie- it’s confirming. I warn some friends to be prepared and 6 days later we have a small earthquake on Easter.  I also asked God to confirm the message and he did in a white Heron in the most unusual locations. So is it coincidence or congruent? Was I confirming just now from the past that we did, in fact, divert a major destruction and maybe why the other disastrous dream in the same week never came to pass?  Prayers are powerful!