I spent my day with my friend we spoke of weird correlations recently experienced but can’t explain, she told me to watch the movie Arrival.

I just finished watching it and although I haven’t completely taken it all in to compose a hypothesis (or even read what people have concluded to get a better understanding) I rather just note what I understood from my view across the couch and let the message I got stay unfiltered.

Essentially for me, what I took away is a great message on how horribly we communicate and how we really need to incorporate a wider understanding with a lot more innocence (there’s that word again) and perhaps we then can communicate clearly.

The key words from movie and spoiler alert if you haven’t seen it:

So yes it’s a movie but very clever at depicting our biggest problem on earth is our communication without thoughtful meaning and heavy in fear.  Dreams/visions/epiphany bring us to view higher perspectives so follow them so you can “ARRIVE” at the right Delineation.

Personal Example this Month (KNIGHT OF FIRE): I had a dream about a friend I used to work with and in the dream she has an injury on her face and comes to me (FACT: I’m the caregiver at work) I offer her medical attention and fresh band aid but I see in the distance a man standing on a streetlight up high, he’s wearing a uniform yellow (I feel he’s a fireman or man of service “feel” is dream language -it’s key to translating) I understand he’s fixed it out of goodwill and he’s not looking for credit either. He then flips backward off an old fashion streetlight on skis onto snow and takes a small jump to leap onto a horse like a cowboy at full speed.  My friend and I are weakened in the knees DAMN. I wake up.

Hillarious right! I felt (signal for DO IT) the need to check up on her as the face scrape bothered me. I text her and well let’s just say I forewarn her that either her or I; or both have one amazing man who’s gonna light us up heading in the vicinity by Winter pay attention! Let’s see!

In reviewing the dream maybe he’s fixing what’s broken because it’s the right thing to do and maybe that why he’s standing higher (higher ground). Yellow is leadership, solar plexus personal power, Snow is renewal and the knight on a horse is to me, hotter than a cowboy and therefore in Tarot it means FAST moving it’s unexpected, could be just a brilliant idea too. That’s my Heptapod translation for: Make sure you notice the good of man and the reward is yours! 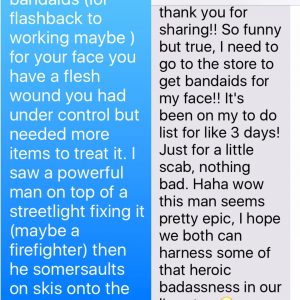 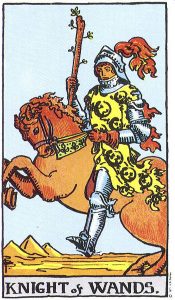