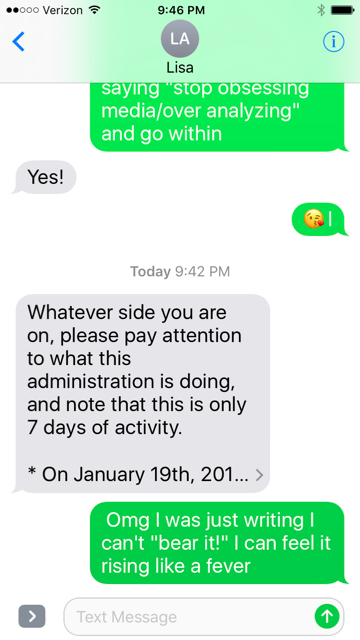 I can’t Bear it tonight!

Meant so much as it does now

What do I mean by that? Ask yourself that question every day “what is the truth?” This applies to not only news sources but paired in your daily existence and especially how does it contribute to the collective? I understand not many consider or even are aware of the term “collective.” A spiritual term not solely consisting of a  group but all of us as a whole; that make up this planet. If we take grapes, for instance, it’s not just about the fruit, but the vines and leaves along with the roots in the earth it burrows in, or the water that fills up fruit and the sun that adds sugar and the bees that support it …just to start.
There was a time when the needs of oneself were considered as shallow and unfairness appalling. No one would have us collectively agree to give up our rights (apple upgrades) or ignore fine print so steadily as we do today in order to seek medical care and everyday services. It’s like we’re living in the wild wild west but the gun slinging is simply overwriting the truth of our freedom for temporary riches, fame, and convenience.
What is the truth?  Why? What is really happening? WHAT REALLY MATTERS? Who matters…really think about that. Go deep, Go Collective and follow that vine to find the truth. We must seek the truth not only in hard facts which are now common to be stretched but how “choices affect the collective.” What happens to another, will result in happening to you.
1/24/17 BLACK BEAR DREAM:
A friend was driving as I was sitting in the backseat down a narrow path alongside a fenced meadow. It was a beautiful scenery and she slowed down when we approached a bear grazing along the fence partly due to fear of harming the car/animal and not knowing exactly how to approach this sudden situation.  As we came alongside,  I marveled at the size and sheer shock of coming so close to this unpredictable beast. My friend put on the breaks to gawk at the bear and I grew uncomfortable within seconds and told her to keep going but she didn’t. The bear turned its giant head to face us and I could see its sad looking eyes just irritated to be bothered. “Go, Go Go!” I wanted to shout but kept my words consistent in continuous shortness of breath but audible enough to cut her fixation. My friend panicked and speed off with force (exactly what I tried to avert by not shouting) and the bear took a swat at our car and then chased us it seemed out of appropriate reaction and a bit of curiosity.
I typed in “black bear metaphysical meaning”:

The bear is an animal that lives a solitary life. Having a bear as a spirit animal can mean that you find balance and comfort in solitude. The presence of this power animal could point to the need to “regroup” and set up boundaries, so you feel comfortable in your own space. It may be a call to find time away from the crowd or busyness and favor quiet time and rest.
The bear spirit can also be a great helper to dedicate time and energy to more introspective practices, such as self-inquiry or meditation. Call on the spirit of the bear to help you find your center and ground yourself in a strong foundation that will support you in more busy and noisy times.

I couldn’t agree more so I stopped and looked at my habits changing since this year started. I was getting hooked by listening to everyone around me from my concerned young “historian” daughter pointing out the past Nazi beginnings to our current events. Friends who were overwhelmed with angst and worry by the alarming barrage of significant changes in cuts and elimination in our support systems.  Even those friends who vehemently defended their votes in what they thought was defiance to “much of the same” or ” I don’t like her” when it implied to their perspective I would respond with “It’s Judgement Day make sure you choose wisely.”  They are getting exactly what they were seeking “complete radical change,” except its far reaching into uncomfortable areas of safety and collectively we are all in this together with or without your agreement.

I looked up my favorite site for more understanding and it was as if it copied my dream:

As a Native American symbol, the bear is as free in spirit as the great wind; and grander than its mass. To match that magnitude is the quality of unpredictability in the bear. A massive animal who forages seemingly peacefully in the woods on berries and bush. when provoked in certain ways, the First Peoples witnessed a ferocity expressed from the bear that (understandably) could elicited terror.
Because of this potentially furious storm brewing just under the surface of bears spirit, our native forebears were extremely cautious and respectful of this animal. Even tribes inclined to peace honored the spirit of a warrior, and witnessing the bear seemed to embody that kind of blind, powerful surge of courage and strength that every warrior is want to tap into.

Bear meanings were enhanced by observations made by tribal sages. These vital tribal figures were inclined to pensive and deeper understanding of how nature communicated intent in all her forms. ↳These sages found connections between human and beast and from these associations would interpret profound meanings that propelled the community into direction, action, and wisdom. –from what’s your sign.com

I pondered that. Could this “Representative” be swatting in retribution in response to our responses? The bear had ‘sad eyes.’ Maybe they wanted to be a Teddy Bear revered but instead, it’s Scrooge with no visits from the ghosts of past, present and future yet.↳What wisdom can we see in association to maneuvering around a beast? How can we remain peaceful when people are keen to equally reactive responses? We have to be truthful in our pursuits and protections and look behind the curtain. We need to shine the light on these occurrences but also keep our center while gathering convictions and that’s when we can change things. We are seeing that reactive behavior is dangerous when we’ve excluded the higher heart like being in stands of a soccer game and mob mentality loses its chance to demonstrate unfairness and change the game; it becomes instead a tragedy. We can’t be swept up in quick emotions but use emotional intelligence to discern what is happening, needed and what can be done but its got to be aligned with purpose.

I took the day off media and anything people sent to me in fear. I found myself dedicated to changing my household disorder to orderly (well more orderly) and when I allowed myself to rest I found a glass of wine to be an excuse to numb and it bothered me and I threw it out and movies I thought would make me laugh annoyed me, and after two tries I turned it off. In other words, I need to go outside and get lost in the hills and feel nature where there are remedies for what ails you. I need a SUNday dedicated to regrouping to find my purpose and ignite my heart. 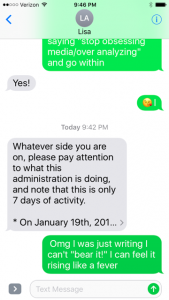 One last observation. This week I had neighbors inform me my car lights were left on by my boys no doubt! The next morning a ceiling fan bulb exploded and burned out the fan,  later that day changing a lightbulb in another room I had another bulb explode. Last night the outdoor motion lights that were “supposedly used up” remained vigilant in pouring light in my room.  “Okay.”  you might think “so what!” “Erica, do you really think everything is a connection my goodness!”  Yes,  in unusual suspicious activity because I ask for the truth and how to help, so when I noticed a glitch I pay attention to what the message is. It’s no different than actual conversations I may have with friends …in which they usually validate: 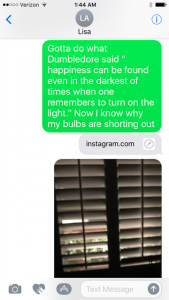 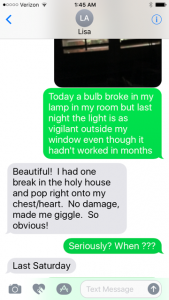