I Deserve an Ocean View!

What in the heck is all this male anger and angst this week; April Fools is OVER!

Working around children I can see the larger patterns played out by them, are pretty close to the outbursts we later learn about in our news. I’m not saying it’s common because it’s not! When you have a day like April 3rd, a day when little boys are retaliating unusually strong all on the same day I don’t chalk it up to coincidence but collectiveness.  I didn’t check out the news I’m sure it showed Mars energy of war but it seems to simmer down until yesterday.

APRIL 4
Yesterday I was approached by a man who at the time I didn’t know he was drunk and belligerent as he just came and sat down across from me, looking exhausted with his shoulders fallen and face to the floor. “Can I help you I asked?” feeling something was unusual and with children nearby I wanted to know why he picked this spot near them. “Yeah I need guidance,” he said I could tell he was evasive and purposeful but for what I didn’t know yet. “well I need to know exactly what you need in order to guide you to the right person…are you…I started to say but he interrupted me “I need guidance on God.” he looked straight at me in a challenging way not threatening physically just wanted to argue (I felt ) about the lack of love in his life.  In my mind, I thought ‘oh honey I wish I could, but this is not the right place and time and you are not in the right state of mind; you don’t want answers but punishment’ I wish I could help him but no one can in this drunken state. “well, there’s a church just down the street that you can visit but there is no one here to help you.” He stood up and I remained seated “it wouldn’t be the first time I was told there is no room at the inn” he stammered. I could see children walking a fair distance but not far enough for me to unleash him just yet to some unsuspecting bystander, luckily a friend saw me and came to be with me and I looked again at him (at this time I could feel my left side of my upper lip swell as if I was stung by a bee) “the best way to find God is to go into nature (pointing away from the children in the opposite direction where there were no people) speak to GOD directly, go to where you see the sun and mountains and speak.” I told him and again he repeated those words “it wouldn’t be the first time I was told there was no room at the inn.” he paused before exclaiming “what kind of Christian are you!” he glared and I answered him directly “I never said I was!” At this remark he took leave.

Later at my desk, I was telling my co-workers what happened and asked them “is my lip swollen?” My friend who came to be with me said:  “Yeah, it looks like you got an injection on one side.” A child runs in “Erica the hawk is here!” I walk out my back door of my office and there he is up in the tree and I notice a little bird close to him unafraid and even hopping on the branch closer to the hawk to get a closer look. I tell my friend that was unusual as most birds dive bomb (as the crows were currently doing to it) and we both watch this cute little thing take a curious look at what should be his nemesis. I tell her “there’s a message and I wonder if it will be a little person or people of little means face a big competitor or foe in the news this week.” I pick up his feather that is on the ground.

April 5
I hear loud solar flares in my head (yes I believe I can hear the static feedback for years reverberate in my inner ear) and it was super loud today I decided to document it when I see that we’ve had 3 big solar flares in just this first week of April….hmm the energy of this angst.??!! I ask my friend who made my birth chart what’s up with the males and she sends me this as I write this blog. I also speak to my mom about the incident and the drunk man and the hawk. My mom tells me the swollen lip was stress (but the swelling went away soon after) and the hawk and the bird demonstrated what happened to me “You were a little innocent unafraid to confront a big problem and your innocence to see him as not always threatening is what the little bird was showing you and Mija, that man was speaking scripture and Jesus shows up in many ways. GULP (I think I even wrote that on a blog a few weeks back) “Oh no, I said laughing ashamed, I shooed him off!” My mom replies “You were calm and unthreatening to him.” OH BOY! I hang up with mom leaving the nature preserve to walk back to my desk thinking about scripture “OMG!” it hits along with today’s events. I’m looking for a place to live and not finding anything yet “no room at the inn” could God be saying “there’s a place for you don’t worry.” It may be last minute and not pretty but it’s already in the works and safe for your babies.

Interesting! Yeah, I’d say my bases ae loaded and I just need to get to home base!

From the Biblical story of the birth of Jesus (Luke 2).

no room at the inn

Today I found out my 2013 taxes I had filed jointly while married (but separated/pending divorce) was not done (his accountant too busy with too many clients left it unfinished) and now my tax refund I need (and counted on) to move and find another place/pay for school registration is held until it’s filed. Stress much!!! I was numb to the fear (thanks, amethyst waves) called my coworker “I need my W4” emailed my accountant the news. My friend hands me the W4 and I swear by divine timing as my accountant who didn’t read my email but happens to be visiting to give co-worker theater tickets; comes to my desk to say hi! I tell her what happened and she takes my W4 “okay I’ll get started.” WOW!

So I think I had my own sun flares of unexpected outbursts and I just keep telling myself “I deserve an ocean view” for two reasons: One, there’s a featured oil painting by my desk of an ocean view by parent who donated it to a raffle to win it (fingers crossed) and secondly…for a bigger perspective on life, in other words, a panoramic view; not everything is at it seems so catch the wave and ride it! 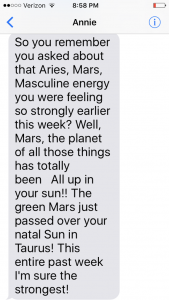