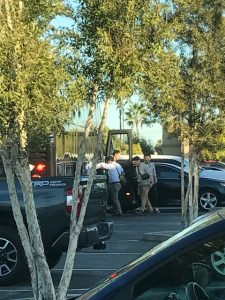 PEACOCK DREAM: I feel for the Asian tourists taunted by Americans when they visit Disneyland (a dream come true vacation for them from where they came from aka “suffering”) having scuffles with ignorance in others, I end up treating a man with a welt on his head as we head into the park.  Now I find myself in this tiki bird kinda room (I never went in that room in all my life as a native Californian but it’s how I imagined it to be) it’s round and stained glass with stadium/circus like seating going up the walls intact with tables and lanterns in all colors (very pretty) in comes all these ladies dressed in Kimono style perfection bringing endless desserts in such detail in jeweled colors on trays, your choices are vast and all tempting.  I feel overwhelmed in honor to share this space with these people who I feel invited me, and I get to see the “magic” in their receiving such opulence my heart just swells.  Now I walk out and feel pulled to the museum memorabilia of the Americas past a woman motions me in she’s dressed in period clothing and I see the showcased vintage baby buggy.  Now my eyes are fixated on the detail of the pattern “peacock feathers” in bold colors and like “Spirit/the Divine” does sometime for me because I over think (lol), it eliminates distraction and pulls my focus directly on a photographic image so the Peacock Print is now all I can see (okay yeah I got it Peacock okay). Then I walk over to a jewelry case and check out a coral necklace I’m attracted to.

The peacock is a possessor of some of the most admired human characteristics and is a symbol of integrity and the beauty we can achieve when we endeavor to show our true colors . The Red Coral Gemstone also known as Praval or Moonga is the Gemstone of Mars/ Mangal as per Indian Vedic Astrology. Mars is the planet of energy, vitality, blood circulation and ambition and the Red Coral is worn to boost the energy of Mars in the horoscope. In the Planetary hierarchy of the 9 planets, Mars is the God of warfare and is the commander of the armies of the Gods.

Not much to the dream except that damn peacock is popping up all over again! Not long after the dream, I met someone who was very proud and beautiful and I immediately thought “oh the peacock!” Later I associated this person as The Beauty and the Beast (kept seeing this in my mind’s eye) a lovely beautiful soul trapped in the materialistic goals that possibly can’t  recognize love right in front of them, only what they perceive should be considered a happy life; not really including LOVE (but maybe desires) a total devoted believer to the facts and figures that measure success in society.  Hey, I was there too . . . picket fences, private schools, resort vacations I think it’s the normal rite of passage but I hope the millenniums continue to seek fulfillment of self and service rolled into one rather than placing one higher than the other. I must also say since the peacock has shown up I took it to mean abundance, not a person.

I bring this dream up because this week has been bringing up past dreams and I’m seeing them pop into my reality. Now, of course, I could be manipulating the images to fit in. Yeah I guess wouldn’t be the first time either, but I can feel it resonate so much so, that I’m sharing this log of events to see if it continues and I’ll keep adding the symbology that shows up (let’s see if it’s a dead-end or just a beginning).

My son excited Netflix released the new Beauty & the Beast plays it last week and as I was walking by not initially interested (things to do) found myself cuddled next to him. My mouth flew open to see a white hybrid peacock looking character and the dessert scene was so similar to my dream and all these thoughts knocking in my mind I laughed out loud OMG it’s Disney film (the dream took place in Disneyland). What is this dream saying?

Storyline Disney’s animated classic takes on a new form, with a widened mythology and an all-star cast. A young prince, imprisoned in the form of a beast, can be freed only by true love. What may be his only opportunity arrives when he meets Belle, the only human girl to ever visit the castle since it was enchanted.
I’d say I’m the one seeing enchantment and hoping to find beauty in all things.

Now yesterday I’m traveling with a friend and I see 2 vintage firetrucks right next to us and of course, I think of my “chivalry dream I wrote about under “arrival.” Reading my mind, my friend says to me “uh oh Erica, there you go!” I didn’t think anything of it until later down the road we see a whole line of vintage firetrucks EVEN PAINTED IN YELLOW now that grabbed my attention! Filling up on gas and there is another truck and she turns to face me in the backseat I smile sheepishly. It wasn’t until I was walking on the pier looking out onto the orange sunset feeling big in my heart and really excited to see what the heavens have planned for me and I turn around only to face a street lantern and it looks just like THAT DREAM lantern too. I muttered OMG what are you saying to me?  At that point, I walked in a daze gazing up at the thin slice of the moon above the sunset and the ocean blue waves on each side of the pier I said out loud “I am open to what you have planned” I realized I have been very guarded because I felt so free, exposed and vulnerable in saying those words because I had meant it. People came up elbow to elbow with me as I leaned over the pier’s edge, for a moment I thought it was people I knew or my friend they were so close, but nope! Strangers could feel the opportunity to engage, and we spoke with a sincere openness (not romantic love) but love was in the mix as we all shared the beauty of the day done.

I didn’t even mention a text I received “hey what’s with Jason, I can’t get “the woman I love” out of my head” I text her back “I don’t know maybe he’s gonna have a baby?  “No, she remarks I don’t think it’s about him just the song,”  I tell her about the peacock and she hits the nail on the head about how I read the symbology too mixed with Beauty and the Beast without me explaining it.

Is Opportunity coming? Hmm, well Jupiter the planet of gifts is coming to shine in my 7th house of relationships on 10/10 what auspicious timing indeed I’m open to it! 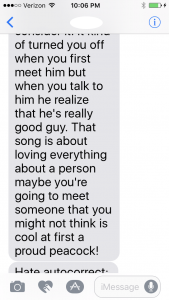 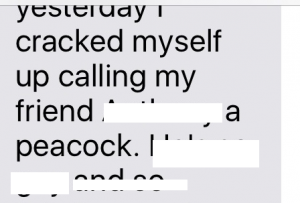 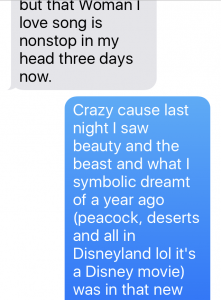 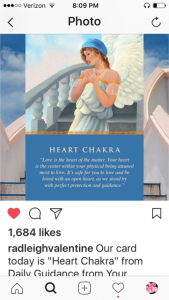 When I wake up I get this message of confirmation 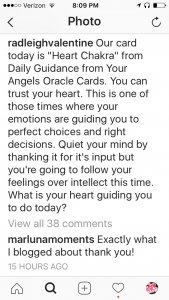 Well I guess that text wasn’t just to lead me to associate “Peacock” but Jason did have a big announcement we would hear a day later that he’s performing in Waitress the musical with Sara Bareilles; wishing I was a New Yorker! 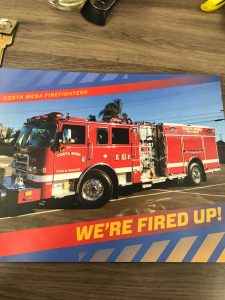 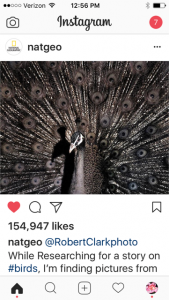