Let’s break out of here! 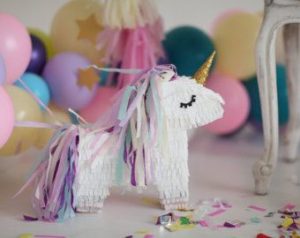 I received word that a friend’s son couldn’t stop vomiting. Their close friend and luckily their family doctor advised them it was probably the appendix but it’s hard to diagnose go to the hospital. The hospital was guessing the same as their doctor but the only way to know for certain is to open him up.

The choice to open him up was given to her college-age son (a young man I saw grow up into a lovable, cool, funny and well respected by all ages) and when I learned he chose to wait it out I was relieved and nervous. On what might be his 3rd day in the hospital I offered to come to visit him or I could send him healing but that I would really like to be there with him if possible and if he approved (and he did).  I was excited to help him at least I had hoped because as I state so very clearly I AM NOT A HEALER but I can activate your body to allow you to heal I think I can reset your body to Calm and shut off the sirens to allow a clear plan for the body to heal itself. I mean, I really don’t know how it works (I’m not trained and I have no idea if it’s like Reiki, better or lesser) I just know I can help. 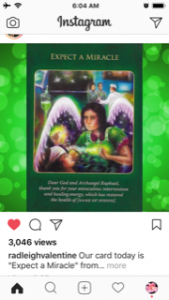 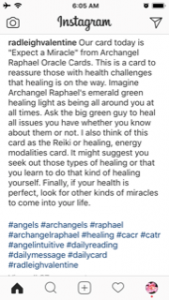 read and instill confidence. I told my friend about the cards so it would help her feel hopeful as I did. Unfortunately he was not doing so well and because they were placing tubes to drain him he was in pain and needed rest so I was to come the next day. Thankfully I received that card because the next day I WAS NOT feeling so keen my iron levels were super low and when they are you can see it plainly on my pale face.  I told my friend “I hope I can help I’m really low on energy,” of course she told me we could postpone but I wanted to help and get started right away so I went.

I grabbed the mini unicorn piñata I won with my son at his class booth and I loved that little thing making me smile and so did the little kids who gather at my desk at times. I walked into his room and placed the unicorn on his bedside “I brought you this because it’s time to party and break outta here!” He grabbed it and said “does it have candy?” Damn, I thought but responded “No, you can’t eat that,” he grimaced as he wasn’t even allowed ice chips at this point as he was starving.

I explained I was on my lunch break and that I won’t take long at all. “I’m just going to call in my angels and yours too to help you.” I placed my hand gently on his swollen belly and closed my eyes and breathed and it was like my hands were anxious to start sending fireworks to him I felt the immense energy and then it tapered off to a slow consistent flow. I then moved to his crown/head to relieve his anxiety and called in the “A team” to work as we do after about 10 min I got up to leave. “I hope you heal fast, did you feel anything or are you so numb on drugs?” I asked. “I’m pretty numb but I felt the warmth.”  His mom walked me out and I told her “I hope I helped,” she said, “I think something happened because it was the first time he smiled since he was in here (later her husband would text me the same message).” Relief overcame me and I told her to sit so I can give her some calm healing. When I was done I asked her to look for signs from heaven (like that card I received) “oh I’m not good like you are” she said and I shook my head No “yes you are we’ve connected on coincidences before.” I returned to the office and my boss remarked: “the color came back to your face, are you sure you helped or he helped you!” I did notice I felt loads better “Giving is receiving” I noted to her. 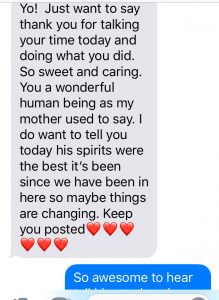 The next day I park and a teacher calls my name from her car and tells me the number of stitches the student I treated yesterday received. I was astonished he needed so many I knew he needed stitches and told his mother but this child did not release a tear until he saw her. Just then a bird landed on the fence across from us “what is that I asked?’ I could tell it was bigger than a crow “A baby hawk,” she remarked. I smiled “a message” ok.

I see my friend whose son is in the hospital and ask how he was doing. “he’s the same but I have to tell you what happened after you left.” I give her my full attention. His friends came to visit and asked what he did all day and he tells them “oh Miss Erica at the front office came in and gave me healing today,” and right when he said that the IV machine moved by itself. She giggles and says “They all looked at each other nervously and my son said, “oh it’s probably just the angels.” I jump up and exclaim “YESSSS!” I’m overjoyed he knows he’s got them by his side and tell her “that’s a sign!” I’m like a cheerleader now jumping because it hit me “oh and this morning I saw a baby hawk land which means messenger/sign after a teacher told me the condition of a little boy I treated. I explain what happened to the boy and now she’s standing in shock. 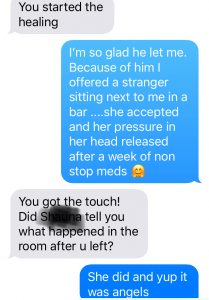 “Erica, I swear as I was driving here I thought of my son and how tough he was when he got hurt when he was little (exact same age and grade) and didn’t cry when it was serious and I don’t know why that came in my mind but…” I snap my fingers that’s the 3rd sign. The healing card, the IV, and hawk; that’s 3 he’s gonna be just fine I can bet on it.