I was doing busying work on a Saturday morning on September 5th. I miss hiking (my church) with closed parks and heat I relented that I should actually pay attention to the neglect of huge pile of things we all ignore when a weekend beckons for play. I put on music from my tv and start chores but soon I hear Andrea Bocelli “Gloria, the gift of life,” come on and I go to see it’s in reference to a movie Fatima 2020. I didn’t ignore the pull to search for the movie was it because I didn’t really want to clean (yeah) was it becasue it was more than that (YES)?

How did I not know of this story having grown up Catholic? I mean I didn’t care for attending church unless it was empty and didn’t have to wear itchy dresses. There’s a lot I don’t know and it seems there is ‘This veil’ and one part of religion I don’t appreciate…but in prayer the middle man is cut out. If you struggle with meditation start with prayer and you’ll find your concentration honing in on what your heart desires or what it wishes to diminish. You’ll find your mind, body and spirit connecting (usually when you’re in a great need of assistance) you’ll feel your brain leave and your prayers almost feel like you’re crying on the knee of the holy ghost or you just feel it’s not just YOU talking to air… SOMETHING fills the room. I thought “confession” was just a way for adults to spy on you it was creepy and a bit cool to go into a booth alone but even as a innocent youth “what the heck do you confess” when God is already watching you?

Was it a way to teach prayer? I mean you were given a few ‘our fathers’ and ‘Hail Mary’ to clear your sins but it was this time in silence in the church on your knees with the aroma of Frankincense and Myrrh in the glow of candle light that made it personal and intimate. It’s what I take as a treasure from that experience and I leave the rest. Are there miracles? EVERYDAY and I’ve encountered too many to ignore and what we’re now naming “manifesting.” There are some great miracles ones we can’t explain but we certainly destroy it than receive them. In this movie on May 13, 1917, 3 children shepherds have The Blessed Mary appear to them and she asks them if they would be willing to help her even when it causes them suffering (suffering for them is to witness great secrets and not be able to speak of it or prove it). They are moved by her presence and accept. They are to visit every first Saturday of the month at the same time of day, praying the Rosary.

I looked at the date on my phone (this was the very date of 5th apparition) the 103rd Anniversary. It had me take a look at prayer, meditation and stillness; the very thing needed this year as we were forced in our homes (confessionals perhaps) facing COVID-19, violence, political mayhem, manmade/natural disasters and loss of decency (I was not praying just thinking, observing but not asking for guidance for mankind).

The movie explains In 1917 there was WWI and people had their sons off to war (many fearing for their loved ones) and the Blessed Virgin Mary shared “secrets” with the children not to be disclosed by Lucia (the eldest child) until 1960. This is where we lose our faith in religion (what exactly was written by this little girl and did the church hide or change the message). It was stated that the children did disclose months in advance proof that “a great miracle would happen on October 13, 1917” and that was indeed witnessed by 70,000 people of all faiths including atheists. The sun danced and spun and zigzagged and although we have some photos of that day the sun was reported to have behaved almost in a threatening way so I imagine this is why people couldn’t capture it’s brilliance on the equipment we had then (you see something darting at you supernatural you’re not going to stand still but run). Of course many speculate and other parts of the world didn’t witness this only in Portugal so there’s the neigh sayers it’s not scientifically possible (that’s the miracle loss on them- it supossed to supersede your little mind on what GOD can do) although all reported it to be raining and everyone’s clothes dried instantly it’s still considered suspect.

If GOD were to open the heavens and peek out we’d say someone figured out how to trick us. We can’t seem to believe what we see or hear everything is challenged.

Lucia became a nun when she later became of age (she was 10 when she saw Mary) and was approached to write down what was shared with her (in case something should happen to her before 1960) and so she did after great physical pain they say. Russia was to be consecrated to the immaculate heart of Mary. “I shall come to ask for the Consecration of Russia to My Immaculate Heart…If people attend to My requests, Russia will be converted and the world will have peace.” It was stated that did not happen and speculation of the church remains on why it didn’t commit to fulfilling this request. It was stated that Russia would infiltrate other nations “The Mother of God cautioned that if Her requests were not granted, “Russia will spread its errors throughout the world, raising up wars and persecutions of the Church. The good will be martyred, the Holy Father will have much to suffer and various nations will be annihilated.” Many believe this is the Cuban missle crisis and there were other secrets mentioned like we would have a sign in the sky giving us “a sign of disproval” which is noted to many as the great Geomagnetic storm of 1938 the same day Hitler took over: https://en.wikipedia.org/wiki/Our_Lady_of_F%C3%A1tima.

Okay so if you know me, you know I can hear the solar storms (at least when I hear this static in my left ear I can see we’ve had either a solar flare (they sound sharper the decibels are piercing) and or geomagnetic storms the earths magnetic field cracked open- if only I could record the different pitches I could examine closer but memory is hard to compare (as if you were blind but would know the different butterfly wings in sound) but I can’t ignore the correlations of timing (heard it earlier today) furthermore it only gives me tastes of it (as I say that it just turned up the volume) it’s not a constant and I appreicate that or I’d go mad. Anyway when I read about the geomagnetic storm that is suposedly connected, it reminded me of this dream I had in November 2018. I know it’s not a dream as many parts of this “dream” has come to pass. So it left me a bit freaked out along with the part that months later in February 1918 the Spanish flu took over (I did see a body placed in a back of a car in italy) in that dream I didn’t write it out but my I shared this with my family and friends “I was in italy on that ‘date, and when I left the famous lady I was waving goodbye to her when I saw men place a body in a body bag made of jute into the trunk of a station wagon just before the sky turned and people along with me saw the Aurora borelius become 2 angels dressed in white robes peer out of the sky.” People fled while I found it miraclous. Maybe that’s just what this message on Fatima is for me.

https://starscriba.com/dreaming-propositions/?et_fb=1&PageSpeed=off I don’t think it’s the end of the world but we do need prayers and faith. We need to keep in close contact with the creator “we don’t know shit.” The moment we place another individual, business or entity as a false idol (white supremacy/money) we enter BIG LOSSES. Let’s not forget miracles even if you didn’t witness them personally you can at least look at what was happening in those times and think DON’T REPEAT HISTORY what are we grateful for and how can we rise above all this calamidy. PRAY don’t lose connection to your divinity and others. 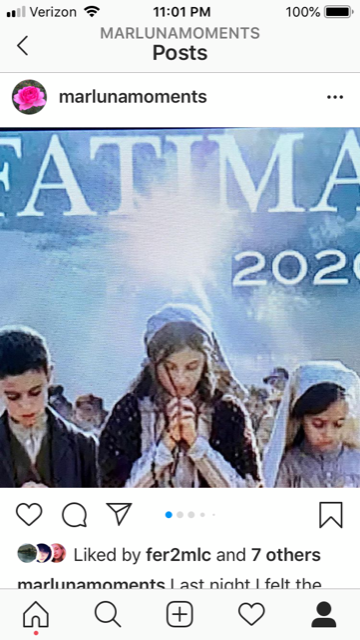 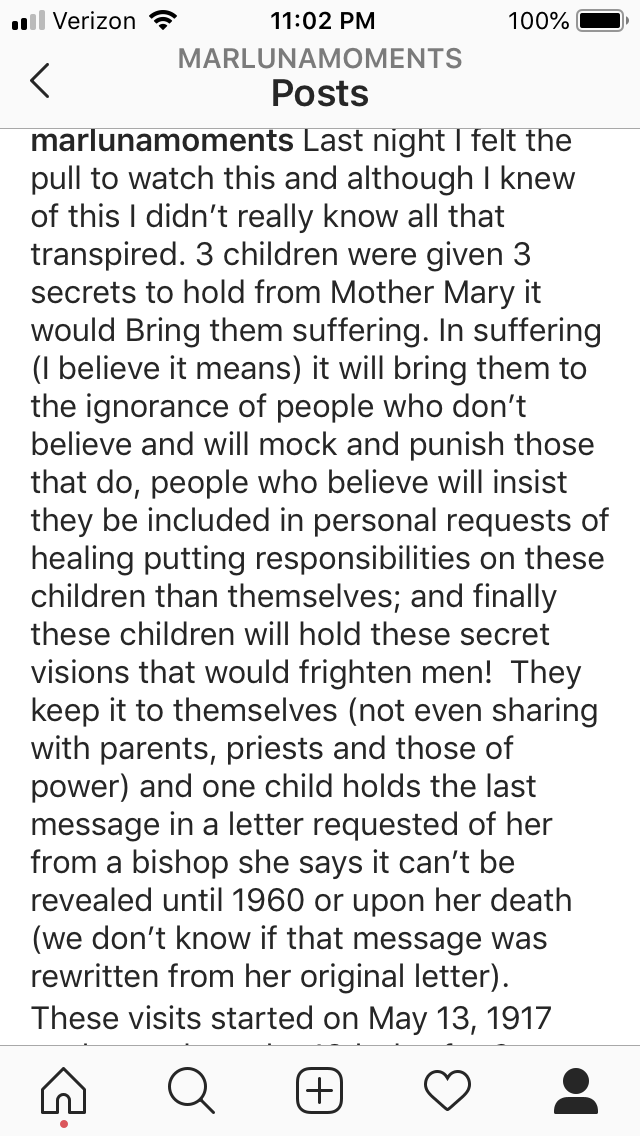 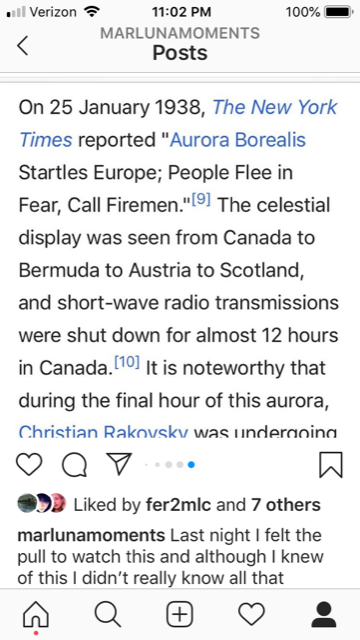 HAPPY 103 Anniversary and isn’t crazy that Mars the planet of war will reach “opposition” and is closet to our planet on this very day in time?????